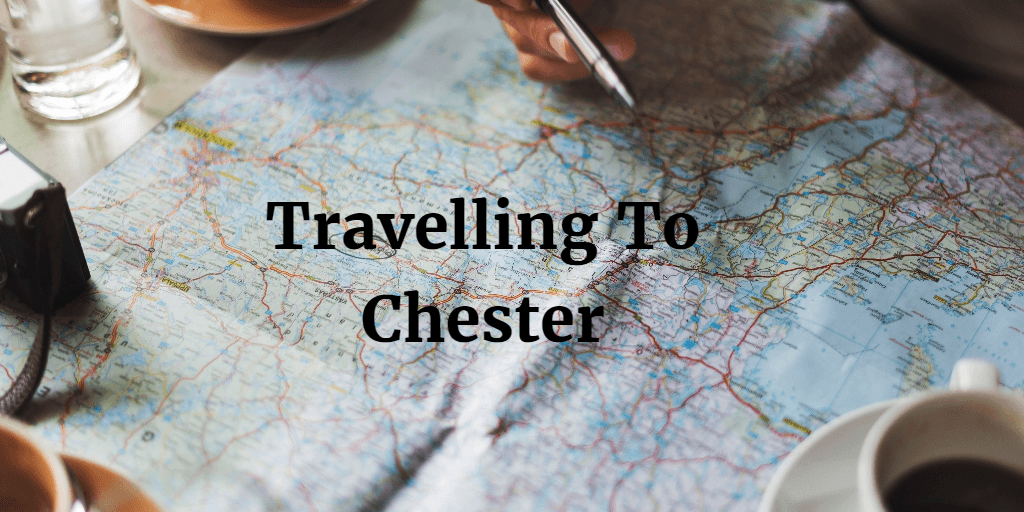 Chester is located in the County of Cheshire in the heart of the UK around 200 miles north of London. Chester city centre is found in the most southern part of England’s Northwest region and an ideal base for visiting Manchester, Liverpool, Shropshire, Staffordshire, the Peak District and Snowdonia in Wales.

Chester city centre is easily accessible wherever you are coming from and what ever mode of transport you choose to get here – whether you are travelling by plane, boat, car, bus, coach or rail.

Once you arrive in Chester city centre our compact walled city is easily explored on foot and public transport. There are numerous car parks, however during peak times the easiest way to travel in Chester is using the park and ride facility.

Travelling to Chester by Air

The closest Airports to Chester and Cheshire are Liverpool John Lennon (30 minutes) and Manchester International (40 minutes), which are both only around 40 miles by road.

Both Liverpool and Manchester airports provide national and international flights.

Hawarden airport is located just over the border in North Wales, 4 miles outside of Chester, however this is only an option for those who like to travel independently to Chester.

Travelling to Chester by Sea

You can travel to Chester by Irish Ferries / Sealink between Holyhead (2 hours by the A55 road from Chester) and Dun Laoghaire (6 miles from Dublin) and Dublin itself.

Travelling to Chester by Road

Travelling to Chester by Car

The chief Motorway links to Chester are through the M6, M56 and M53.

It is possible to hire a car at airports and some of the larger towns in and around Cheshire (including Chester, Crewe, Macclesfield and Warrington).

Chester is located near the eastern end of the A55, which becomes the M53, that crosses the M56.

As Chester is directly linked via the M53 to the national motorway system, London and all of the major regions in the UK are easily accessible from the city.

Travelling to Chester by Bus or Coach

Local bus services serve Chester and if you are "eligible disabled" or over 60 years of age your National Bus Pass will give you free off-peak bus travel throughout Cheshire county.

For £1 each way the Chester city centre Bus picks up and drops off at the Railway Station, New Bus Interchange and Foregate Street stop AA.

Travelling to Chester by Train

If you are travelling to Chester by train the railway station is northeast of Chester city centre.

From Chester railway station, trains travel to and from London Euston Station every couple of hours (2 hour trip).

Trains also travel to and from Liverpool every 30 minutes (45 minute trip) and Birkenhead. Chester Train station is a southern terminus on Merseyrail's Wirral Line which provides direct trains.

Chester also offers a Rail Link through to Manchester Airport, which includes four through trains to and from Chester.

Direct trains also travel via and from Chester to Birmingham, Cardiff and Shrewsbury.

Chesters park and ride services provide a stress free way to travel to and from Chester city centre whether you are a one time day tripper, shopper or regular commuter.

There are four park and ride locations (all have the Park Mark safer parking award), providing a total of 3170 parking spaces surrounding Chester city centre, where you can park for free before hopping on the regular bus service (peak times every 10 minutes and every 15 minutes off peak) to make the quick and easy trip to Chester. A return bus fare to Chester city centre costs just £2. Accompanied children under 16 years travel free (maximum 2 children per adult).

Set down and pick up point Foregate Street and Pepper Street

Deva Tuk Tuk, Chester’s first and only auto rickshaw Tuk Tuk with a private hire licence, offers an alternative way to experience the City of Chester.

There are also city centre taxi companies to help you get around the Chester city.

The City of Chester – A Video From Big Heritage

A Walk Through Chester, England