Yesterday was a fabulous day of glitter and glamour as Chester celebrated diversity and supported the LGBT community. It seemed like the whole City got together to party for the 5th Birthday of Chester Pride, a charity run entirely by volunteers that relies solely on sponsors and donations to happen each year. 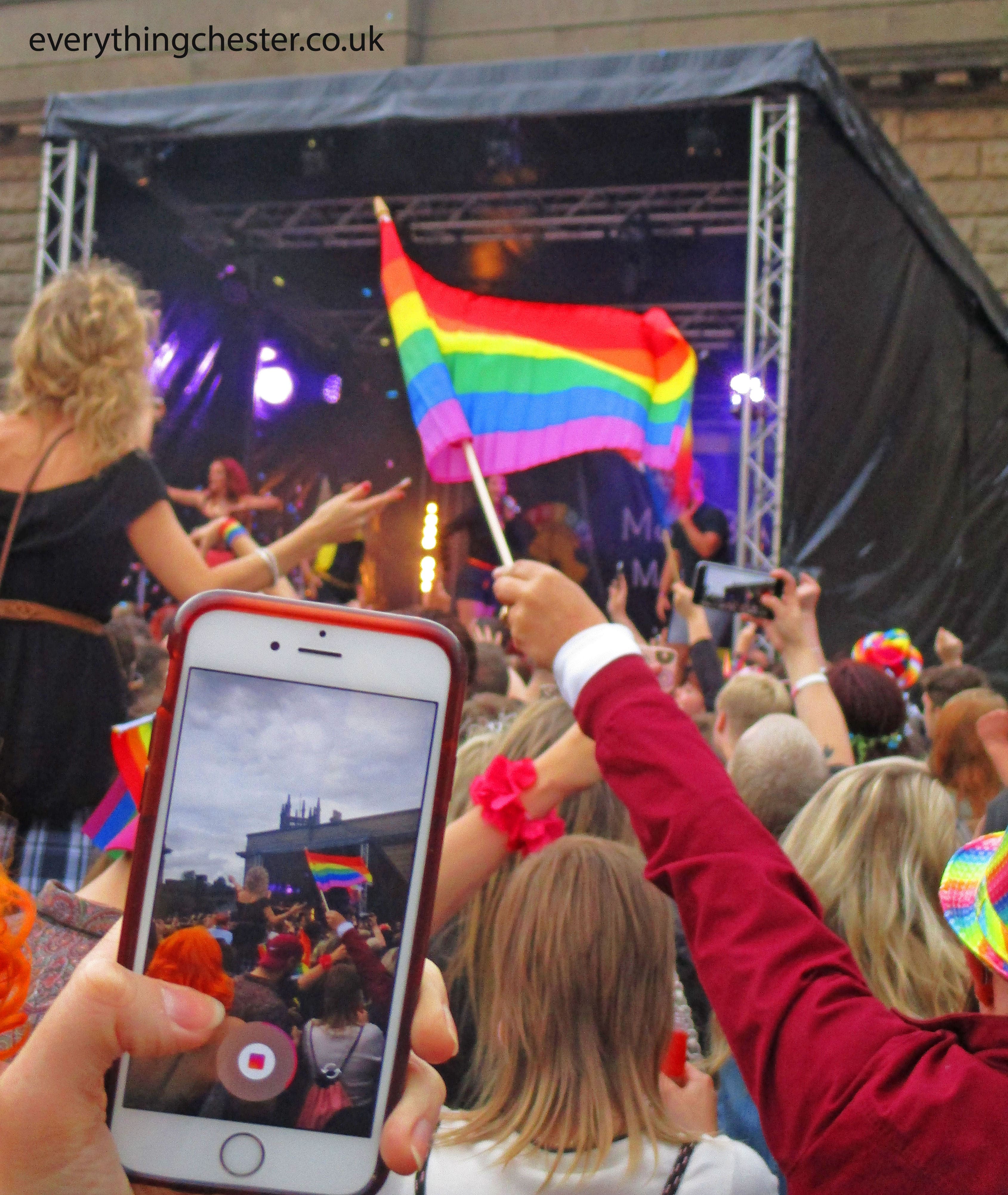 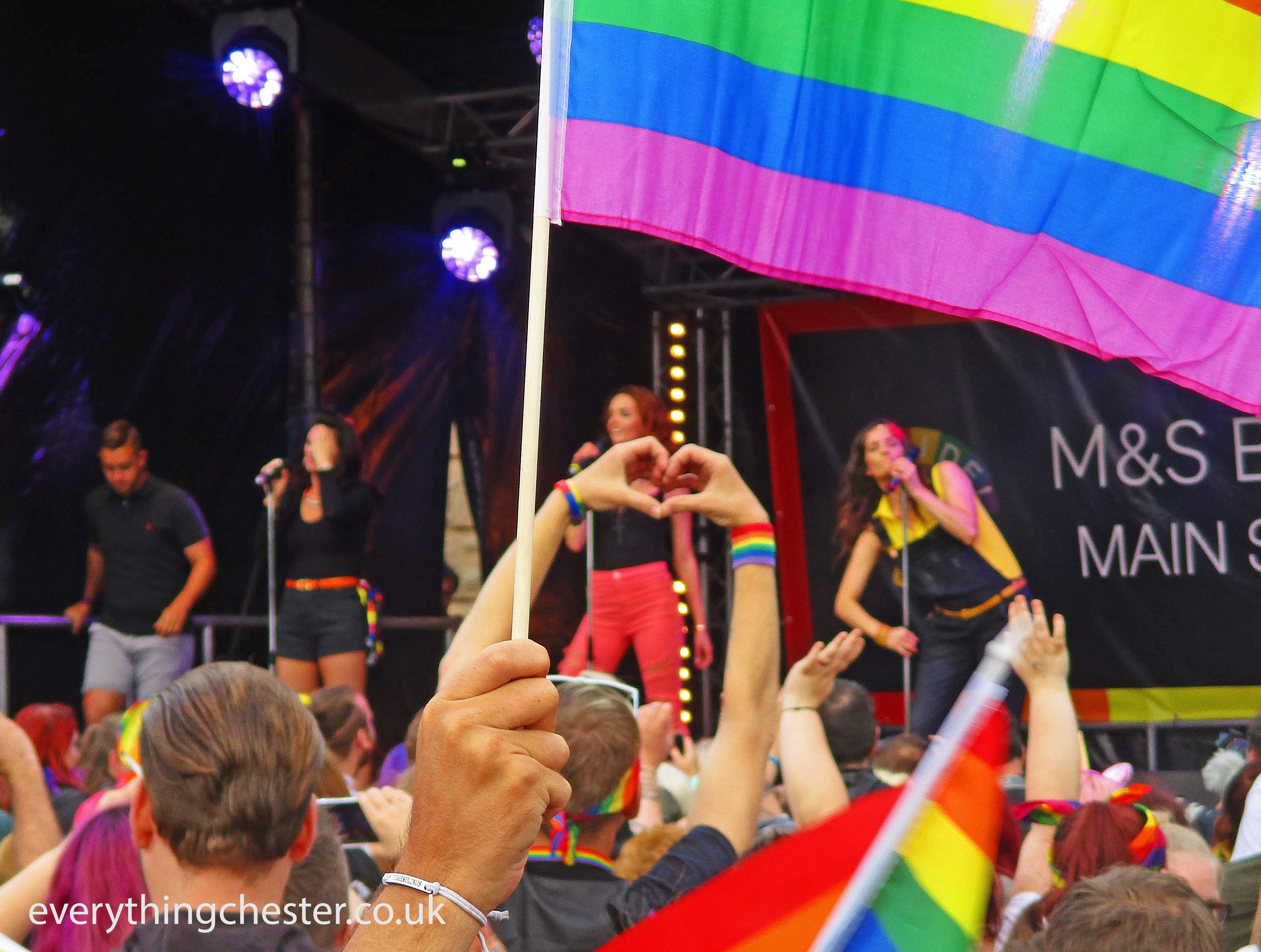 This year marks an important date in our shared history, as England and Wales observes the 50th Anniversary of the 1967 Sexual Offences Act which discriminated homosexual acts in private and between two men aged 21 or over. It wasn’t until 2000 that the age of consent was equalised to 16, and there is still work to do in the UK and worldwide.

With that in mind, this year’s Chester Pride’s theme was LGBT history featuring ”Pride in the Past”, a pop up exhibition that explored LGBT+ in the Roman times to present day in Chester and Cheshire.

Rainbow flags flew proudly across Chester and throughout the surrounding borough over the weekend, with support for the festival shown from local authorities, public sector services, local Chester organisations, businesses and volunteers.

In the guide for the day Chester West and Cheshire Council, an equal opportunities employer, celebrated that it gained a place in 2017 in Stonewall’s Top 100 lesbian, gay, bisexual and transgender (LGBT) friendly organisations for the first time.

As I headed into Chester city centre with friends our must-see checklist included the 90’s pop group B*witched, Vicky Jackson the Pink tribute act, the outrageous drag act Shagger and local Chester singer-songwriters Me and Deboe, however we were expecting some other pleasant surprises . . . and we were not disappointed.

The day kicked off at 12pm with the Chester Pride Walking Parade where proud Cestrians armed with banners, costumes and rainbow t-shirts supported diversity and celebrated the Chester LGBT community. The only rule was the more colourful and creative the better.

At the Pride in the Past you could uncover the hidden story of LGBT in Chester and Cheshire. It told the story of nearly 2,000 years of LGBT history of Chester and the surrounding county. From cross-dressing Romans to the memories of modern residents, the story has been pieced together from the collections of the Grosvenor Museum and archives of Cheshire Record Office. 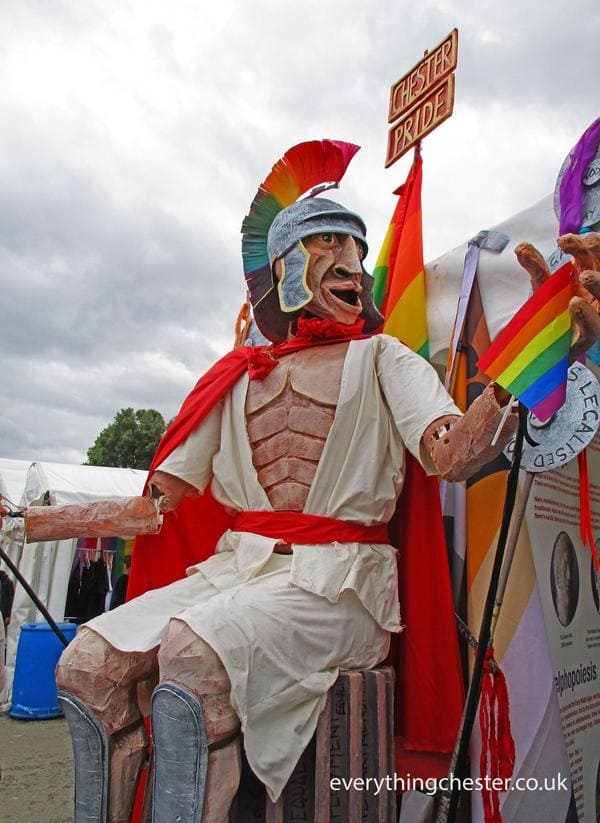 The Silver Rainbows, an Older Peoples Social Network for lesbian, gay, bisexual and trans people in Chester and Cheshire, ran a space with memory box’s, music, oral histories, quiz’s and a photo booth.

As we arrived at Castle Square we headed straight to the M & S Bank sponsored Main Stage where Me and Deboe, a Chester alternative folk duo where just beginning the show. We have seen them play in various bars around Chester recent years. Like passed performances they played a mixture of cover songs mixed in with their own material. 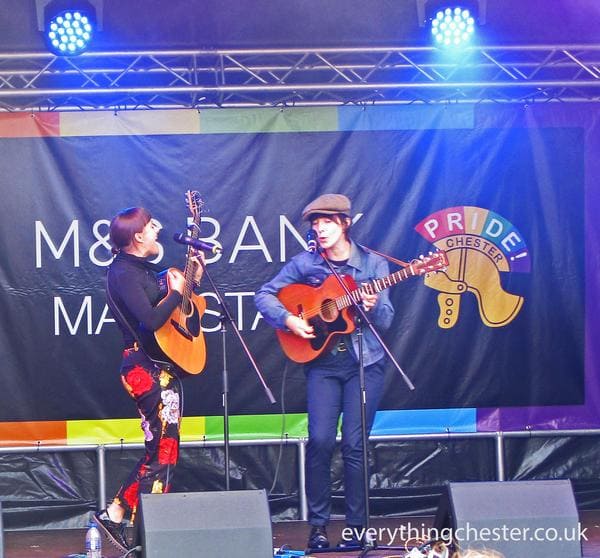 We swiftly headed to the food and drink marketplace and purchased our first of many drinks from The Old Queens Head pop up bar, who’s Chester pub is a regular haunt.

Next we headed back to the main stage for an excellent performance by Vicky Jackson a Lady Gaga tribute. She shortly returned to the stage as Pink and in between several costume changes played all the hits. It was like being a few feet from the actual Pink and her mannerisms where spot on. 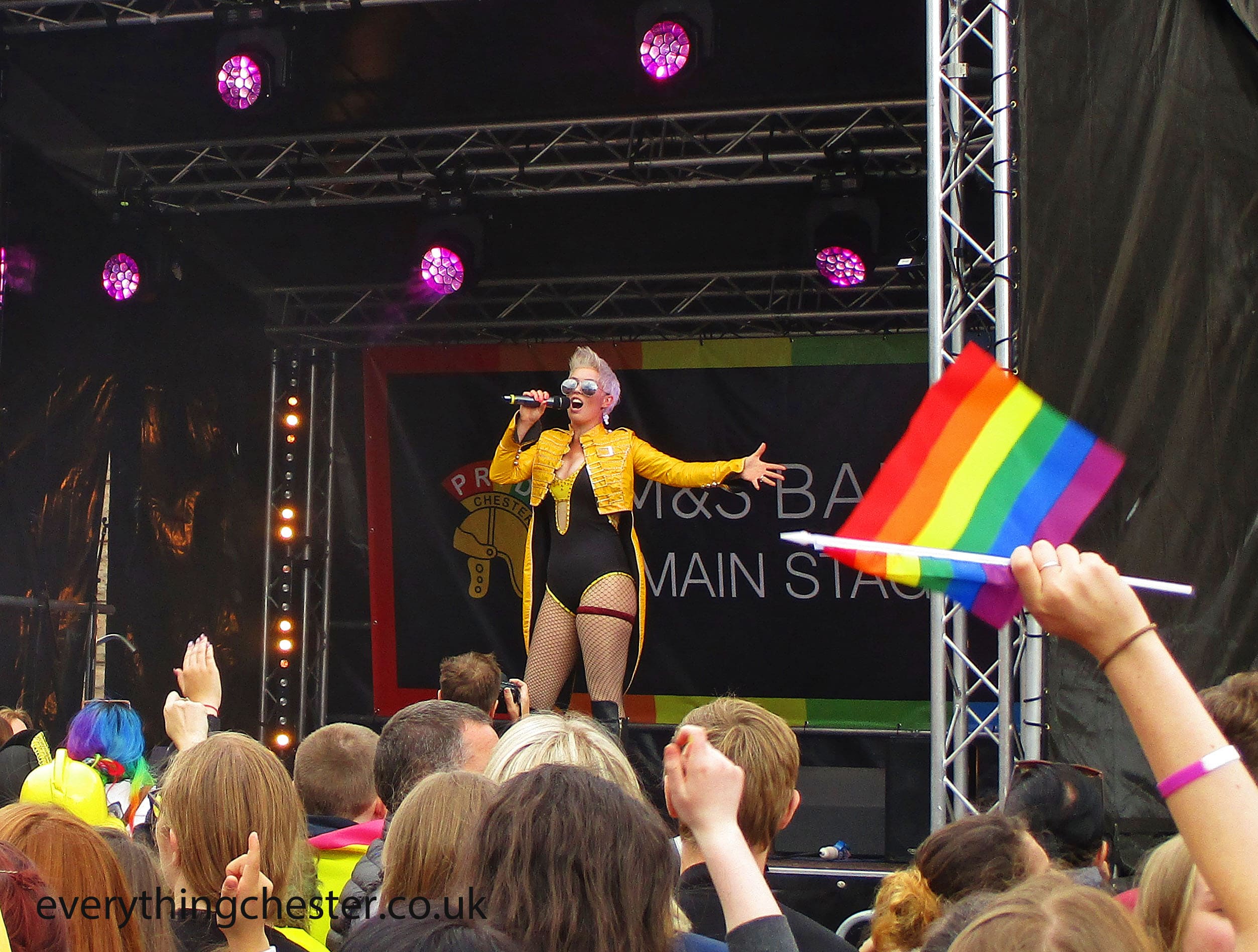 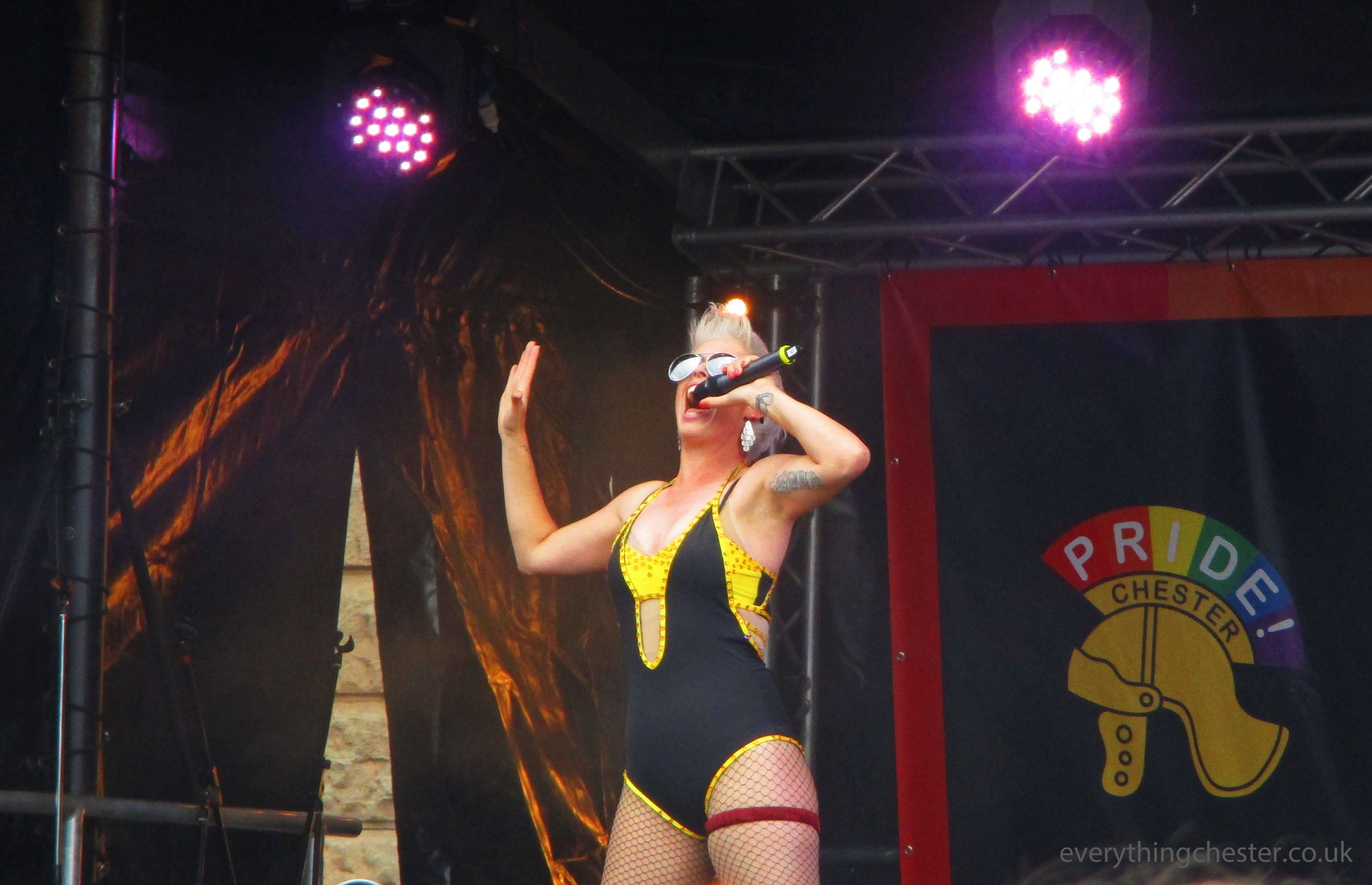 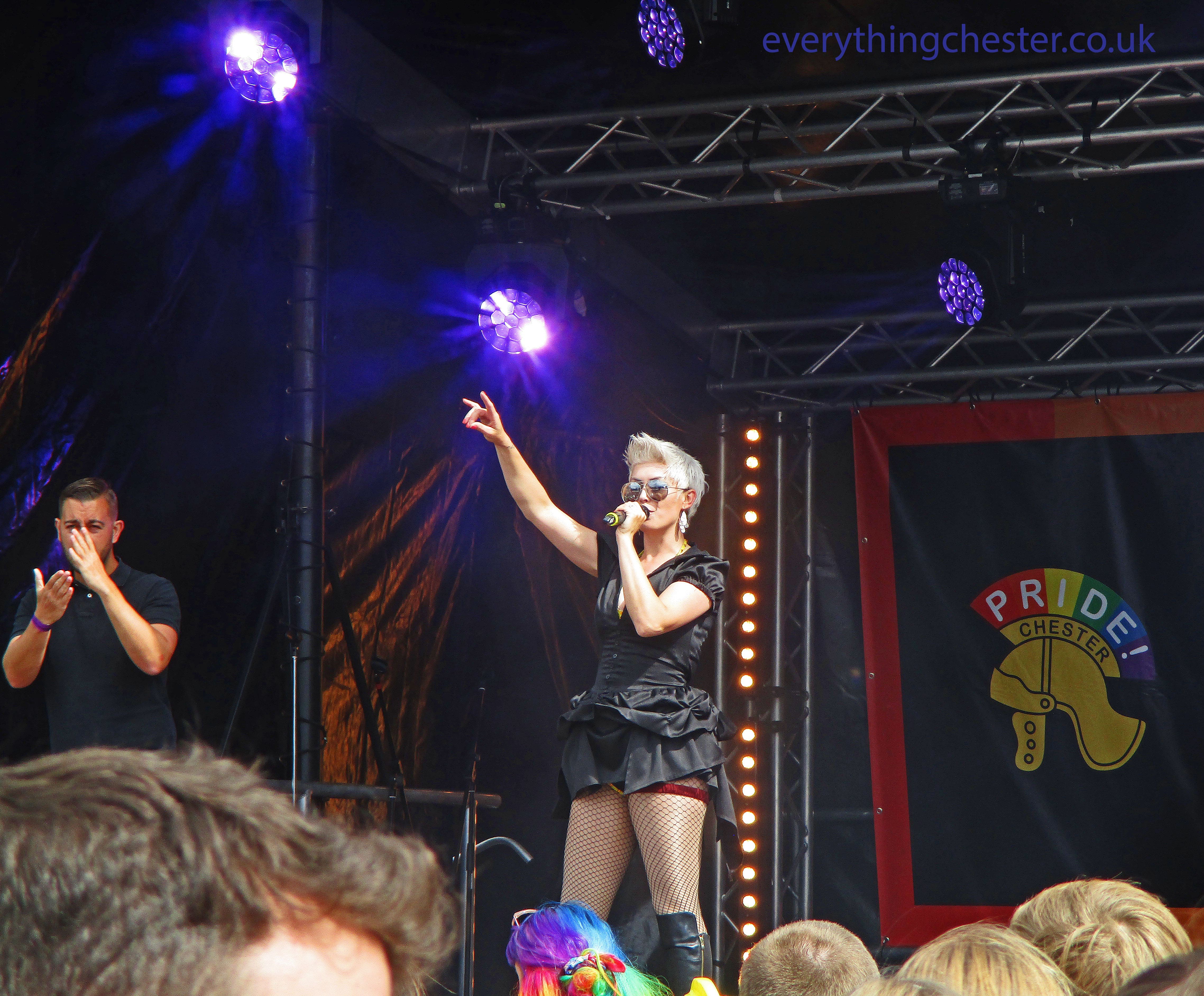 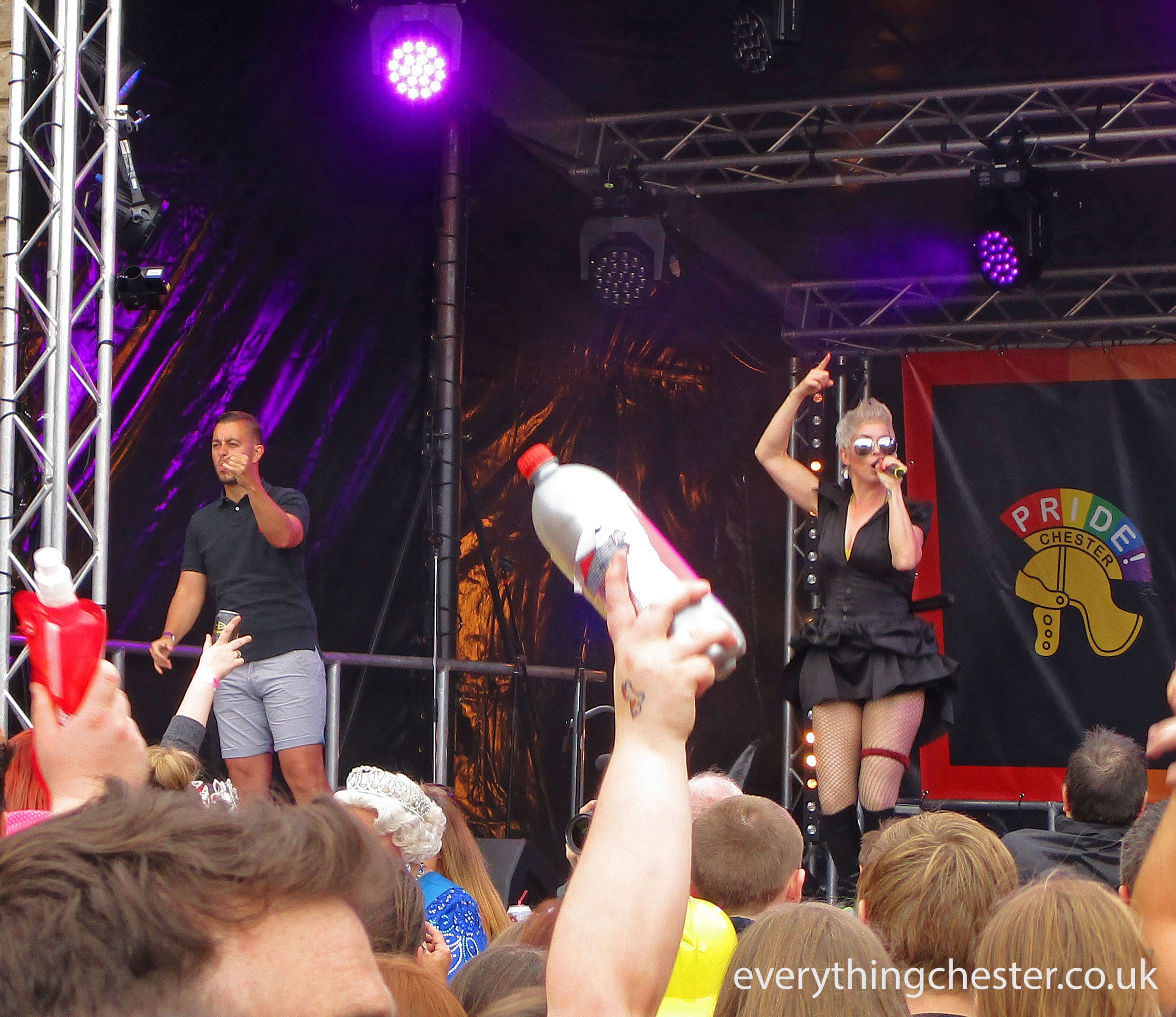 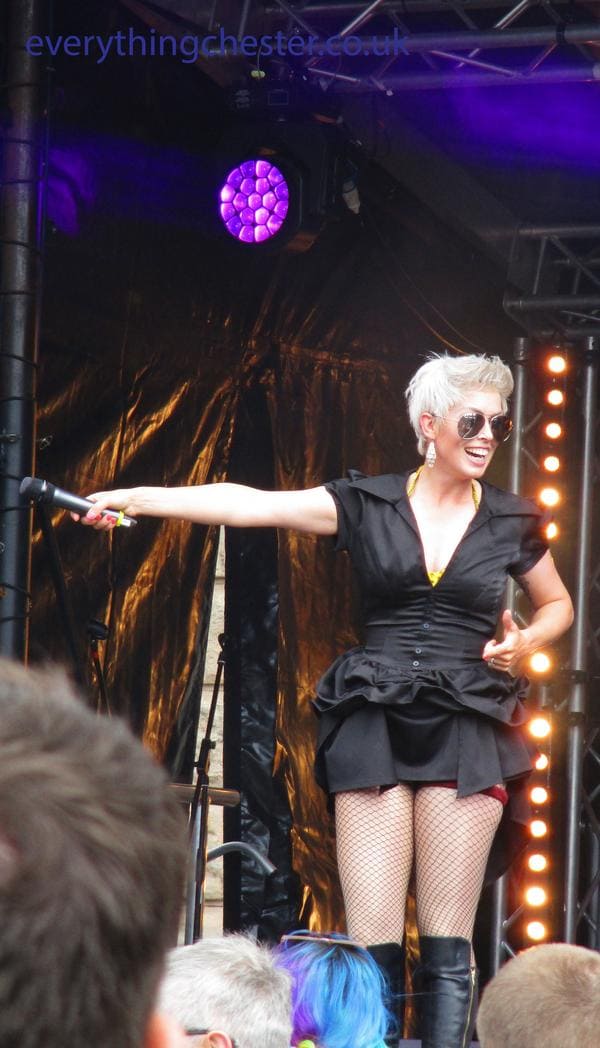 We spotted Shagger a Chester drag act mingling in the crowd on the way to The Glitter Lounge Cabaret Stage, where karaoke had just starting. Out of the corner of my eye I noticed the dressing room curtain pull back revealing a man in white underpants complete with a white face and ducks yellow beak applying eye shadow. I had not seen this act billed (joke intended!) but after enquiring was told Donald would be on at 5:30pm. 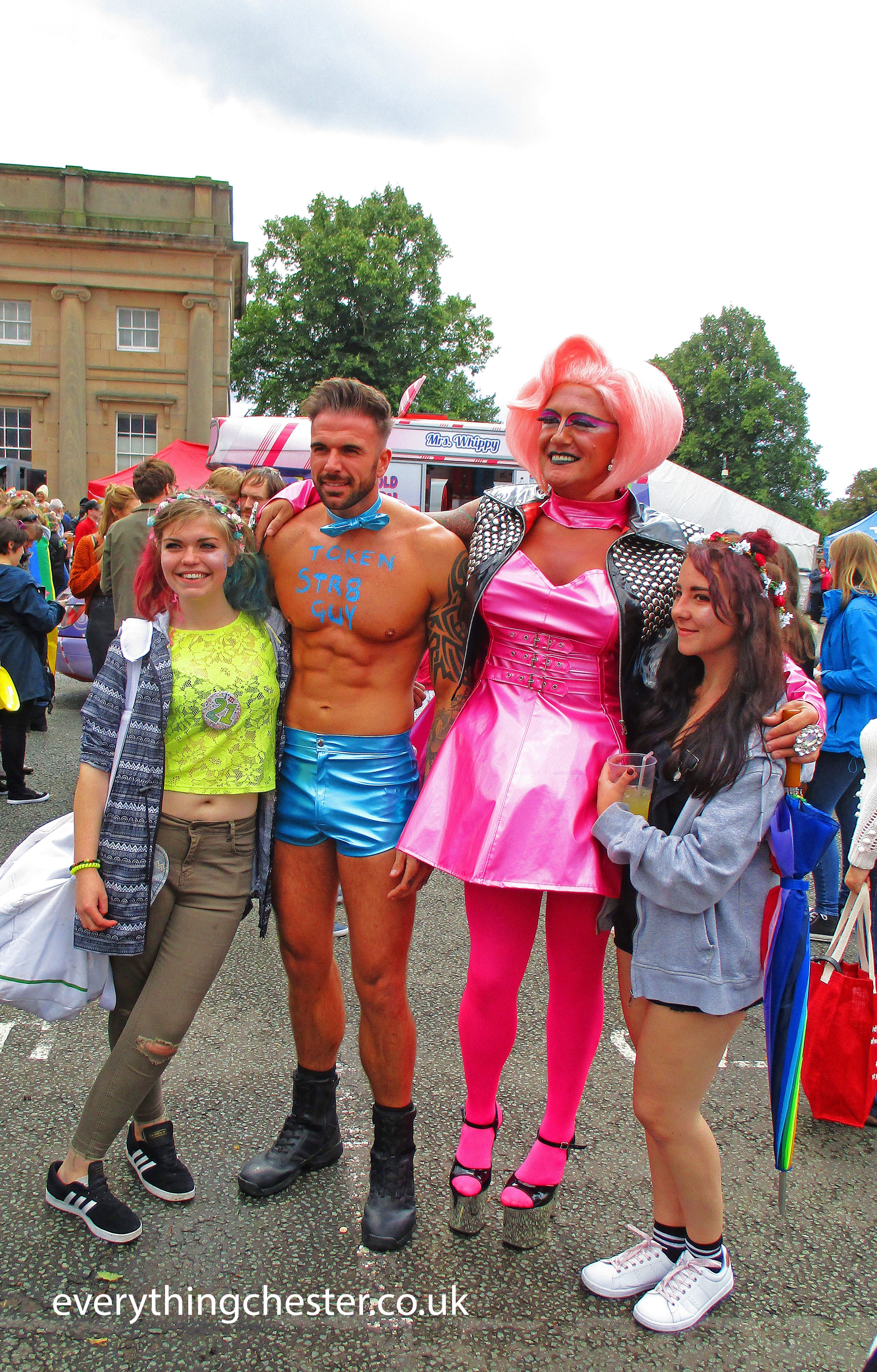 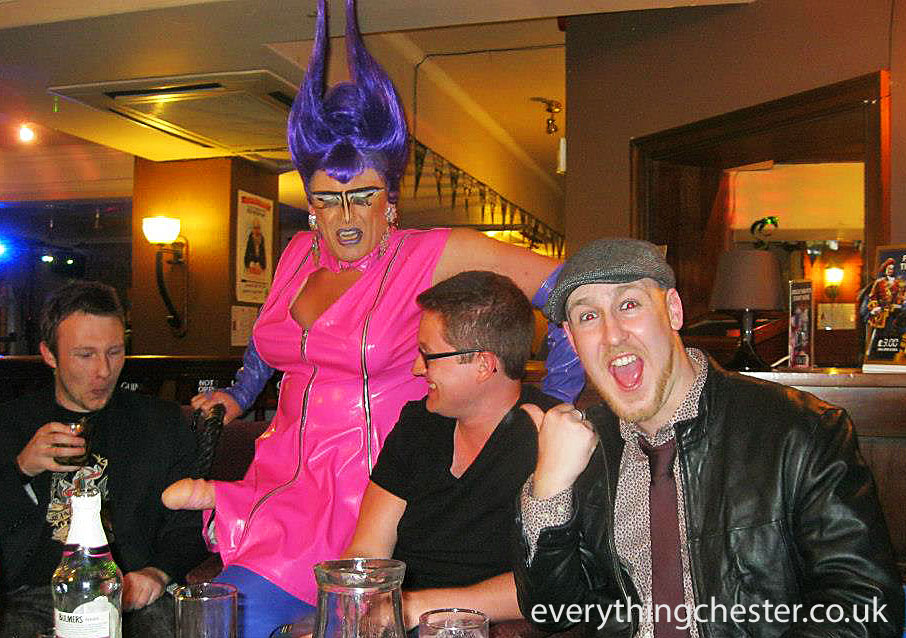 More friends joined us, additional drinks where drunk and we all returned to the Glitter Lounge for 5:30pm promptly. Unfortunately this unexpected display resulted in us missing Shagger’s performance on the Main Stage.

We did however catch wrestling in the Glitter Lounge before Donald The Duck delivered a hilarious 15 minutes of mime. 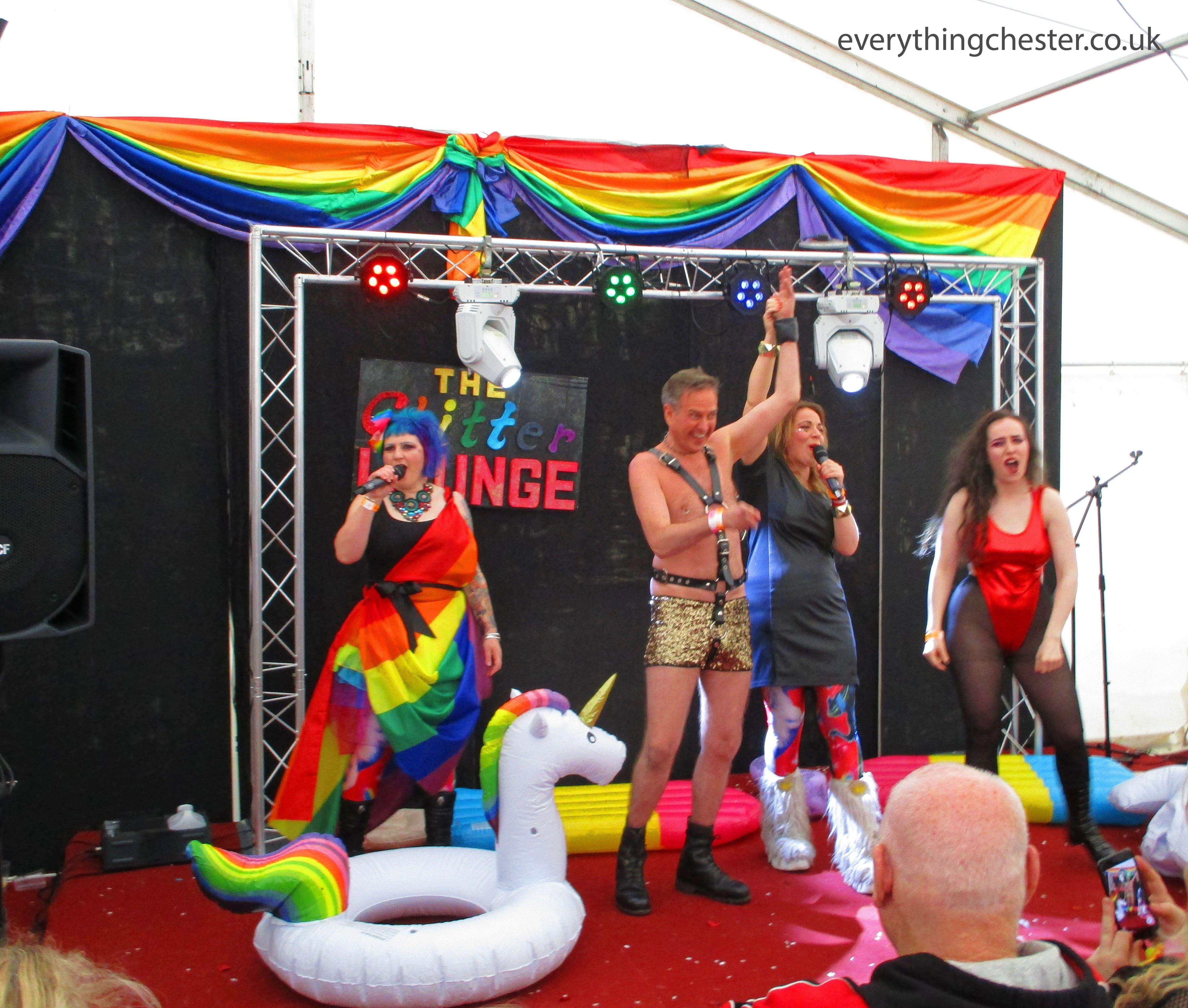 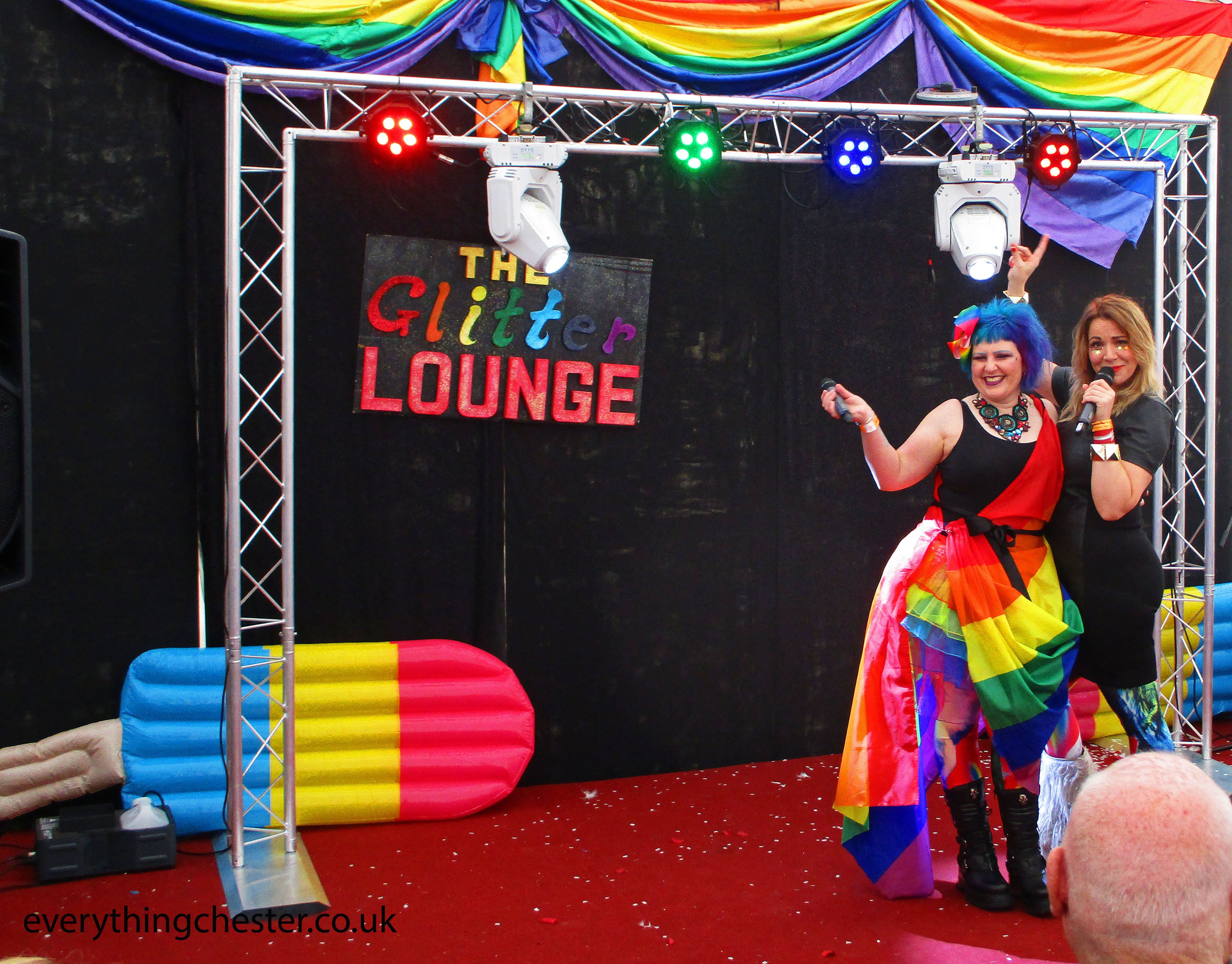 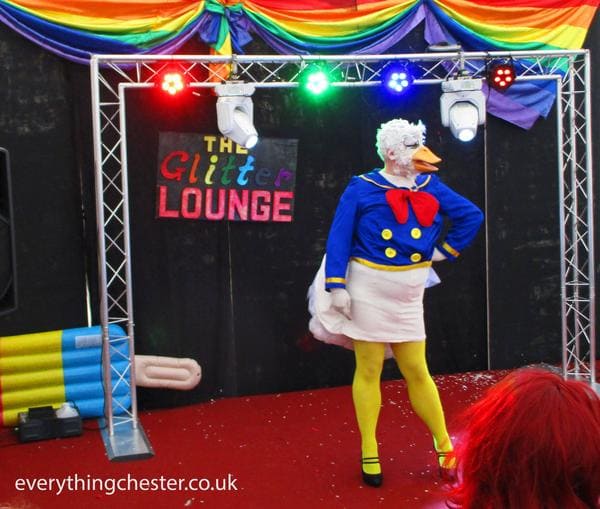 It was not time for the headline act - B*witched. While waiting for the entertainment to begin we met a guy who had seen them perform in Liverpool a few years ago, and had brought an umbrella especially for their Blame It On The Weatherman song. 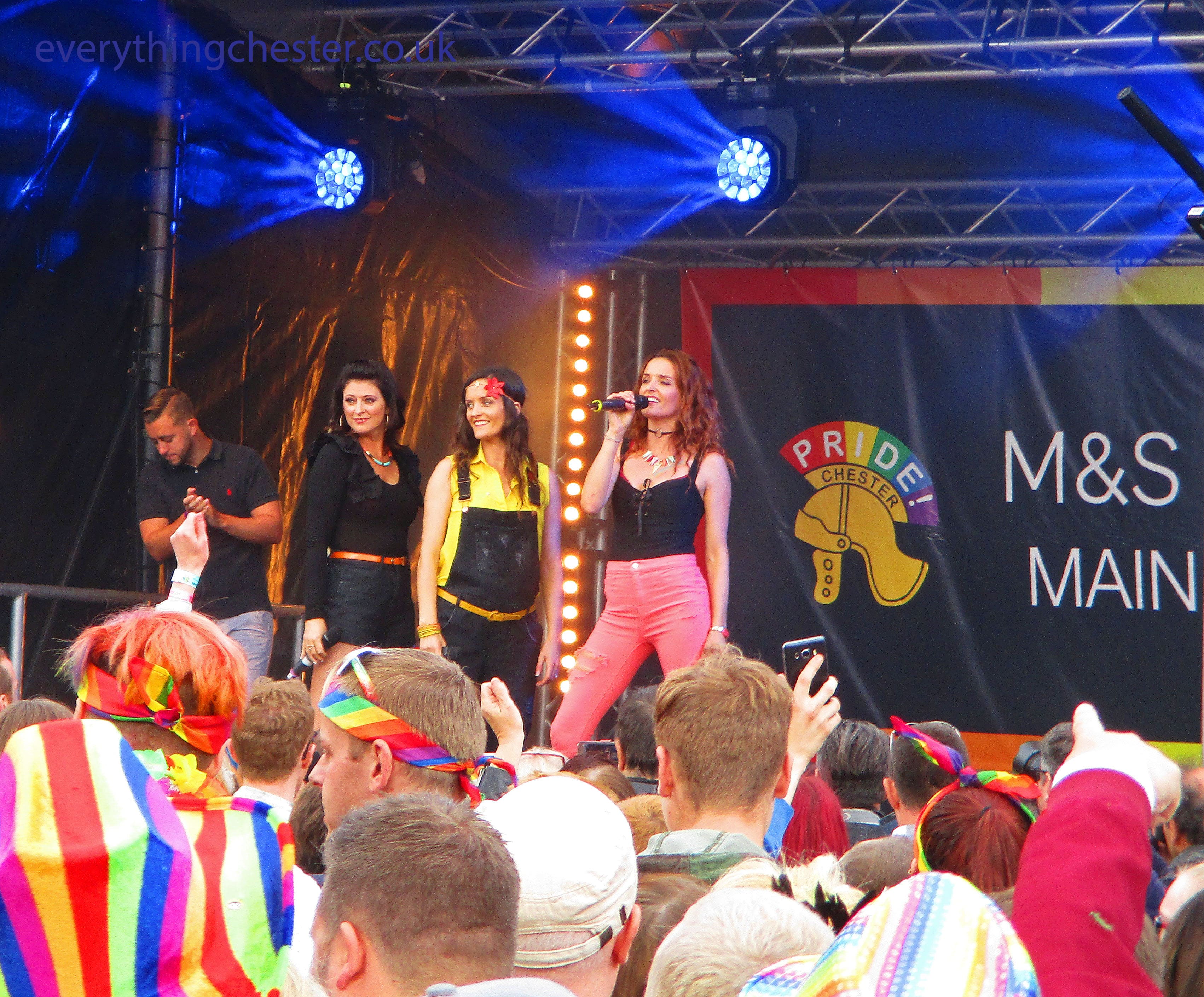 B*witched saved C’est La Vie for the encore, which was interspersed with Ed Sheeran’s Galway Girl. During the main show they covered a medley of Abba hits.

The Chester Pride festival inspired the whole community to embrace inclusion and demonstrates that organisations, businesses and people from all walks of life can join together and celebrate our differences.

Although B*Witched Blame It On The Weatherman the rain held off from midday onwards, but this was perfect as the precipitation provided a rainbow for the opening of the Chester festival.